To share your memory on the wall of Charles Glen Coleman, sign in using one of the following options:

Print
Charles "Glennon" Coleman departed this life on Friday, January 29, 2021 at the age of 69. He was born on September 23, 1951 in Bonne Terre, Missouri, a son to the late Martin and Madeline Coleman.

Those who remain to cherish his memory... Read More
Charles "Glennon" Coleman departed this life on Friday, January 29, 2021 at the age of 69. He was born on September 23, 1951 in Bonne Terre, Missouri, a son to the late Martin and Madeline Coleman.

In addition to his parents, Glen was proceeded in death by two brothers: Roger and Danny Coleman; and two brothers-in-law: Terry Wilson and Gerard Boyer.

Mr. Coleman worked in Fenton, Missouri for Chrysler until he retired from there in 2002.

Glen had a great influence on the lives of many by his generosity and knowledge of horses. His love for his land and working on the land with his daughters and grandchildren. He was a fair and honest man that spoke his mind and lived his life how he seen fit. Stubborn in his ways he lived his life to the fullest and was happy living amongst his animals , land and family. He was a great supervisor of work to be done.

Mr. Coleman enjoyed watching westerns, spending time with his girls and grandchildren and being a collector of many things and animals over the years. Glen loved a good glass of milk, biscuits, bananas, and vitamins which almost made him invincible. Glen was good dad, and was a proud Frenchman. Glen was wise beyond the years. Often said,”The world wasn’t built in one day. Even god would take a rest.” The Charles G with the big C will be deeply missed.

A Funeral Service will be held Saturday, February 6, 2021 at 10 am held in the DeClue Chapel. Interment will follow in the St. Joachim Cemetery, Old Mines, Missouri. Funeral arrangements were respectfully entrusted to DeClue Funeral Home.
Read Less

We encourage you to share your most beloved memories of Charles Glen here, so that the family and other loved ones can always see it. You can upload cherished photographs, or share your favorite stories, and can even comment on those shared by others.

Thank you Norma! Uncle Louis, Aunt Norma? Thank you for that memory.

Posted Feb 02, 2021 at 03:55pm
Charles Glennon Coleman was so proud of his French heritage. Proudest Frenchman that ever lived! One day he did one of those DNA test that explores your roots. So excited to see just how much French he had in him. I was curious being all through my high school years many thought I was French. When his results came back, he read the word English. That was the day that broke Glen’s heart. He told me, “Bambie, I am so hurt. Reading that like to kill me.” Looking through Ancestry, there was a person with a French background. Yes! A heart saved. DNA can not tell you everything. His heart felt a little better upon finding this information. So here’s to Charles Glennon Coleman! The best Frenchman that ever was! I love you Poppie.
Comment Share
Share via:

I always thought there was a strong french ancestry. Grandpa Louis Coleman and Grandmother Lillie Sansoucie even spoke french. Sending my deepest sympathy to you and the families. Love and prayers, Aunt Norma (normacoleman@q.com) 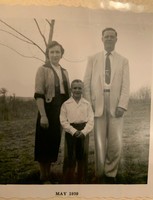 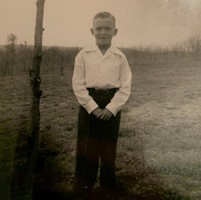