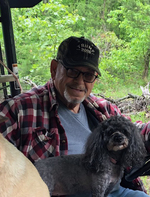 Cletis Wayne Andrews Sr of Potosi, Missouri was born on March 14, 1940, a son of the late Lester B Andrews and the late Zola M Bradford. Cletis passed away on Friday, December 25, 2020 having reached the age of eighty years, nine months and eleven days.

Cletis was preceded in death by his parents: Lester and Zola Andrews; siblings: Joan Denbow, Mel Andrews and Gail Carter.

Cletis loved the country, outdoors, and enjoyed taking care of his rabbits and chickens—the eggs he would give away.

No services will be conducted at this time. Funeral arrangements were entrusted to the care and direction of DeClue Funeral Home.