To share your memory on the wall of David Grant, sign in using one of the following options:

David passed away on Monday, September 14, 2020 having reached sixty-one years of age.

Visitation for David was held on Wednesday, September 16, 2020 at DeClue Funeral Home, beginning at 12:00 PM. A funeral service began at 1:00 PM held in the DeClue Memorial Chapel, officiated by Pastor Rick Posey.

Interment and final prayers were held at Redbud Memorial Garden Cemetery. All funeral arrangements have been cared for by DeClue Funeral Home.
Read Less 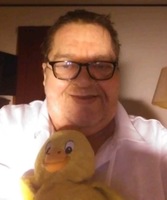