To share your memory on the wall of Kathryn Smith , sign in using one of the following options:

On June 21, 1987 Kathryn was united in marriage to Paul Smith and they shared thirty three years together.

In addition to her father and mother, Kathryn was preceded in death by her daughter Karen Marie Sills; and her father-in-law and mother-in-law: Paul and Emma Smith.

There are not enough words to describe Kathryn Marie Smith. She was so many things to so many people. Some titles that she was most proud of were the titles of teacher, friend, wife, mother, grandmother, and great grandmother.

She excelled at each of the roles she had. Her husband Paul always said what a fortunate man he is to have had Kathryn for a wife. Her daughters could not have asked for a better mother. She worked hard to give them a good life and often had several jobs to help provide for her family. She was always there for each of her 7 grandchildren and was making strong bonds with her 6 great grandkids.

Kathy had become an honorary grandma to everyone who was a part of her life. That being said, she was the grandma to many: from the people at her church, to the children’s lives she touched as a teacher, and the babies lives she touched with her volunteer work she completed at her daughter Chris’ daycare.

Kathy Smith was a fighter. There were many times in her life when doctors and others counted her out, but they didn’t know the spirit and faith that she had. She proved them wrong over and over again. At one point, she was only given 6 weeks to live and that was 29 years ago. So being a grandmother and a great grandmother was one of her proudest accomplishments because there was a time when she didn’t think she’d have that!

Kathy was a devout Christian. She was a proud Sunday school teacher, and also enjoyed teaching vacation bible school in the summer. She was a prayer warrior. Anytime something was going on, she would be the first to pray. She started her mornings out letting her loved ones know she was praying for them and loved them with an early morning text. She loved her Savior and it showed in her daily actions.

Kathy was a giver. She gave her time to everyone who needed her, whether that be a listening ear, a giver of advice, or someone who needed prayer. If someone needed help and she was able, she was the first to be there filling a need before it was ever known.

Kathy Smith took people under her wing. She worked for several years at Valley Springs Youth Ranch and was not only a teacher, but a house mother. As a teacher, she made each of her students feel special. One example of this was on their birthday she would make sure that each of her boys at the ranch had a birthday card, cake, and a candy bar with a soda. She had the kindest and sweetest heart and truly loved everyone. The teaching she did reached well beyond the classroom.

The legacy Kathy Smith has left and the seeds she has sewn are unending. She’s touched and changed many lives. She will be greatly missed and never forgotten.

A Funeral Service will be held Thursday, July 2, 2020 at 11 AM at Belgrade Pentecostal Church of God with Brother Brad Asher officiating.

Interment will follow at Caledonia Methodist Cemetery. Funeral Arrangements were respectfully entrusted to the care and direction of DeClue Funeral Home.
Read Less

To send flowers to the family or plant a tree in memory of Kathryn Marie Smith (Kovac), please visit our Heartfelt Sympathies Store.

We encourage you to share your most beloved memories of Kathryn here, so that the family and other loved ones can always see it. You can upload cherished photographs, or share your favorite stories, and can even comment on those shared by others.

Posted Jul 07, 2020 at 07:05pm
I just heard about Kathy's passing, as I do not do social media. I was her boss at the Ranch School for years. She was an amazing, compassionate woman who never had anything unkind to say about anyone. She worked tirelessly at many jobs because she always wanted to help her family. I used to call her the energizer bunny! I enjoyed praying with her many times and talking about the Lord. She now has the great reward for her life well lived. She always put others before herself. I am retired now but have so many great memories of Kathy. We will see her again!! Texas Balderas, Black MO.
Comment Share
Share via:
HS

Flowers were purchased for the family of Kathryn Smith . Send Flowers 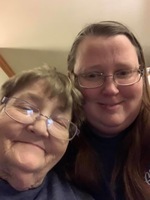 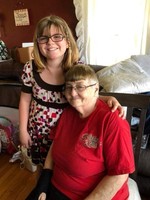