To share your memory on the wall of Larry Wisdom, sign in using one of the following options:

Larry is preceded in death by his father and mother, Lawrence and Shirley Wisdom; and his step son, Zachary Wright.

On September 24, 2016, Larry was united in marriage to Sheila (Kean) Wright and they shared three years and ten months together. During their marriage, Larry and Sheila made some wonderful memories together. From Cardinal Baseball games, to concerts, to one of Larry’s favorites, the Apple Butter Festival. Sheila truly loved Larry and was grateful that he helped her overcome one of the hardest times in her life that she faced, the passing of her son Zachary. Larry brought sunshine in the midst of her pain.

Larry loved his children and grandchildren with all his heart. They were his life. He enjoyed spending time with them and every chance he got to play jokes on them. If the weather was nice, Larry loved going for bike rides on his Harley Davidson. In addition to his motorcycle, Larry was always up for BBQ’s, and especially some of Chelsea’s potato salad. His legacy will forever live on through his family.

A Funeral Service will be Sunday, August 16, 2020 at 10 am held at DeClue Funeral Home. Interment will follow in Redbud Memorial Gardens. Larry received full military honors presented by VFW Post 6996.

To send flowers to the family or plant a tree in memory of Larry Wisdom, please visit our Heartfelt Sympathies Store.

We encourage you to share your most beloved memories of Larry here, so that the family and other loved ones can always see it. You can upload cherished photographs, or share your favorite stories, and can even comment on those shared by others.

From the Graue's Scott, Renee and Chrissy, Swanson Families: Deb, Cindy, Lynne, Linda, and other have sent flowers to the family of Larry Wisdom.
Show you care by sending flowers

Posted Aug 15, 2020 at 09:46am
With our deepest sympathy, from your friends at the Festus Post Office

Flowers were purchased for the family of Larry Wisdom. Send Flowers

Posted Aug 15, 2020 at 09:45am
Larry was a family friend of ours my Brothers friend they hung out all the time and we as sisters was in the midst of their business all the time. We will sure miss you Larry as the years went on in our lives I wish we would of taken time out to get together more than over facebook. love you Renee
Comment Share
Share via:
FC

From the Graue's Scott, Renee and Chrissy

From the Graue's Scott, Renee and Chrissy purchased flowers for the family of Larry Wisdom. Send Flowers 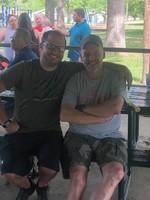 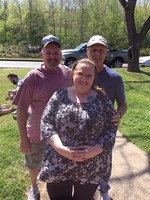