To share your memory on the wall of Paul \"Butch\" Smith, Jr., sign in using one of the following options:

Provide comfort for the family by sending flowers or planting a tree in memory of Paul "Butch" Smith, Jr.

Provide comfort for the family by sending flowers or planting a tree in memory of Paul "Butch" Smith, Jr.

There are no events scheduled. You can still show your support by sending flowers directly to the family, or planting a memorial tree in memory of Paul "Butch" Edward Smith, Jr..
Plant a Tree

We encourage you to share your most beloved memories of Paul "Butch" here, so that the family and other loved ones can always see it. You can upload cherished photographs, or share your favorite stories, and can even comment on those shared by others.

Posted Oct 12, 2020 at 10:34pm
Butch, we have been married for 25 years! And we had our ups and downs but we made it through it . The last 12 years we departed our ways and still remain married. We both love to fish and camp have fun . .But then 2 years ago we tried to work things out but it didn’t work out. Due to the way you had different people in and out I honestly couldn’t live like that . I’m gonna miss you and it’s getting harder and not easy at all ! You left me too soon and left everyone to soon, you are up there with your dad and my dad planning for deer season. That’s what you liked to do was to hunt and fish . We went fishing more than once and had a good time . R.I.P Butch loved you more than you thought . You would call me around 5 am in the morning just to see how I’m doing like always I would be getting ready for work! Love you til we meet again! Watch over me and others ! Just doesn’t seem real that you are gone ! I cry every night and day !! LOVE You with all my heart
Comment Share
Share via:
JS 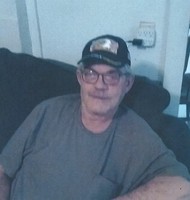