To share your memory on the wall of Ray Nettles, sign in using one of the following options:

On February 25, 1961, Ray married the love of his life, Virginia Barron and three children were born to this union. Ray and Jenny shared fifty-nine years of marriage together.

In addition to his father and mother, Ray was preceded in death by his grandson, Andrew Volner; sisters: Joyce Glore, Linda Nettles and Beverly Western.

A Funeral Service will be held on Saturday, November 14, 2020 beginning at 11 am held in the DeClue Memorial Chapel with Pastor Kevin Kappler officiating.

Interment will follow at Redbud Memorial Gardens. Funeral arrangements were respectfully entrusted to the care and direction of DeClue Funeral Home.

*DUE TO HEALTH CONSIDERATIONS, FACIAL MASKS WILL BE REQUIRED FOR ALL SERVICES.
Read Less

To plant a memorial tree in honor of Ray Nettles, please visit our Heartfelt Sympathies Store.

We encourage you to share your most beloved memories of Ray here, so that the family and other loved ones can always see it. You can upload cherished photographs, or share your favorite stories, and can even comment on those shared by others.

Posted Nov 13, 2020 at 09:19am
We are so sorry for your great loss. Praying for the comfort of the Holy Spirit to surround you and your family during this time.

Flowers were purchased for the family of Ray Nettles.

Janny & Andrew purchased the Medium Dish Garden for the family of Ray Nettles. 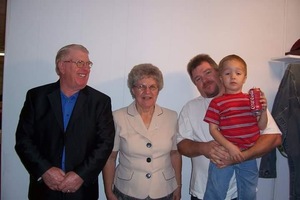