To share your memory on the wall of Virgie Sansoucie, sign in using one of the following options:

Virgie was preceded in death by her parents, Thomas and Gladys Boyer, loving husband, Joseph L. Sansoucie who passed away on January 12, 1993; brothers, John Calvin Boyer and William “Bill” Boyer.

A Visitation will be held on Wednesday, May 26, 2021 from 11 am to 1 pm at DeClue Funeral Home. A Funeral Service will immediately follow at 1 pm. Interment will be held at New Diggins Cemetery.

We encourage you to share your most beloved memories of Virgie here, so that the family and other loved ones can always see it. You can upload cherished photographs, or share your favorite stories, and can even comment on those shared by others.

Posted May 24, 2021 at 08:38pm
Aunt Virgie ( as most kids called her) loved children. She loved to spoil my kids with cookies and milk. She was always ready for prayer. I was blessed to have known her.
Comment Share
Share via: 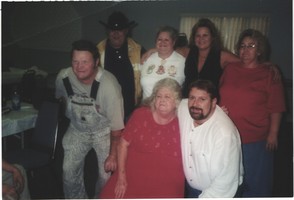