To share your memory on the wall of William \"Tiny\" Middleton, sign in using one of the following options:

Bill went to his Heavenly Home on Thursday, November 26, 2020 having reached the age of eighty-nine years, one month and twenty-one days.

In addition to his father and mother, Bill was preceded in death by his grandson, Andrew James Moss; and six siblings and in-laws: Louis and Leoma Middleton, Lowell Middleton, Othel and Anna Middleton, Gladys and Lindell Minx, Beulah Middleton, and Elmer and Louetta Middleton.

*For the health and safety of all, face mask will be required.

We encourage you to share your most beloved memories of William "Tiny" here, so that the family and other loved ones can always see it. You can upload cherished photographs, or share your favorite stories, and can even comment on those shared by others.

Flowers were purchased for the family of William "Tiny" Middleton. 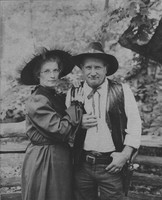